Crowd-funding. People have used websites like GoFundMe to bring in money for all kinds of reasons. I have seen them for surgery, tuition, funerals, to make an album, hard times, and to help keep schools open.

I mean, I guess it’s not just for money anymore. Apparently, you can use them to solicit meals and therapy. Enter Meal Train. It’s a website that allows parents to receive help, in any form, after surgery, birth, or illness. Website here.

Imagine my surprise when a couple expecting their first baby attempts to solicit elaborate meals and therapy from their neighbors b/c the husband is afraid of not getting enough sleep!!

While it may be customary for family or friends to help out a new mother for a few weeks after the birth of the baby, what makes them think that they can expect that help… from their neighbors?! Article here.

Jim Burns and his wife, Alex, are expecting their first child on April 29th. Jim decides to use MealTrain to ask for meals and therapy b/c he’s anxious and nervous about the impending birth.

The NY Post states, “As the father-to-be, I’m teetering on a fence of emotions… One of the things I’m most afraid of is not getting a great deal of sleep and as a result not being in the best frame of mind to offer my wife the support she needs to recover from the child-birthing process.”

Jim and Alex aren’t asking for casseroles, they put together a special meal plan and wants it followed specifically. The NY Post states, ” In the special instructions menu, Burns posted a lengthy list of favorite dishes [click here to see the thread on Twitter and links] — separated by breakfast, lunch, and dinner — along with links to their recipes.”

For breakfast: “Paleo breakfast egg muffins with thinly sliced cremini mushrooms, pork breakfast sausage, and 3 tablespoons of melted and cooled ghee,” according to NY Post. There were no less than 11 recipes that he posted for dinner suggestions such as a spiced lamb meatball and Swiss chard stew.

Neighbors are requested to drop the food off, but not expect to see the baby, Alex, or Jim in the process. You have to “…text him to ask what they need, but notes that it shouldn’t always require a visit inside his house. If we could use some food but prefer no distractions, I’ll put a big white cooler in our side yard”

NY Post reports, there is an exception to that rule, “if the couple does welcome in their new cooks, then they may ask for the dishes to be washed, the dog to be walked or for the courtesy of small talk to get their minds off ‘the new routine’ with their newborn.”

Now, the thread has gone viral. An actual neighbor, Jokinen, saw it and posted it on Nextdoor for all his neighbors to see. Some people called the couple out on their madness.

“I think it’s way too much and completely out of touch,” he says. “Maybe there’s some bigger issue that we don’t know about, like a health issue, but in those situations, you put that [information] in … it seems like the husband is unprepared and his primary concern is his sleep. There are a lot of ways to make meals very quickly.”

“They’re having a baby, not both dying of cancer,” tweeted an outraged Andrea Bachman. “Reality is hopefully going to slap these two in the face one day.”

Jim responds: “I apologize if it was taken the wrong way — and I’m frankly just very surprised and a little disheartened by … the response,” Burns says. “If they are not interested, then they don’t have to check that site or do anything. This is the world we live in.”

Meanwhile, Jokinen jokes that the Burns’ Meal Train campaign could set a precedent. “When my wife gets pregnant I may start one of these but we only eat food from suites at Yankee Stadium,” he says. “Leave the tickets in the mailbox.”

A Rant in my Spirit: 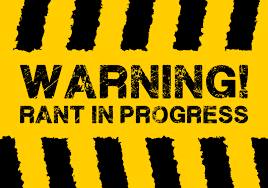 This is really doing too much and really not in tune with reality. Like, do you even know these neighbors beyond a simple wave or “hi/bye” exchange?

I mean, there’s nothing wrong with asking for help. Matter of fact, I wish more people would do it. However, you two really played yourselves here.

Who in the world asks for help, then turns around and tells people what help they can give with recipes attached? Nah. That’s not how any of this works.

When you ask for help, you allow people to help you in the way that they can or don’t ask at all! People usually help out of the kindness and goodness of their hearts.

Then, you talking about you want this help b/c you are afraid of not getting enough sleep. Are you SERIOUS?

Then you ask the people that you don’t want to see to bring you food and talk to you, but only when you want to talk b/c you’ll need adult conversations?!

So, they don’t even get to see the baby when they are supposed to drop off food made to your specifications?? 😳😳

Stop the madness. I’m too through! 🤦🏾‍♀️

You’re having a newborn, y’all ain’t the first people to have one. NOBODY sleeps when they have a newborn!!!

Stop acting like you’re incapable of caring for a baby. No, they don’t come with an instruction manual, but you can figure it out.

If you can’t figure it out even with doctors, doulas, the Internet… then please don’t have any more children.

I am a writer, blogger, and a creative. I am multi-talented. I am awesome! 💖 I write b/c I am better with written words than spoken words. Get into it. #DopenessActivated