If there’s one thing that I cannot STAND it’s when parents use their children as pawns in their own games against each other. Here, and most often, it’s the woman who plays the games. It happens time and time again.

Like, why? Is your life that miserable? Do you not want the guy you slept with, had this child with, and the relationship ended somehow, to move on? 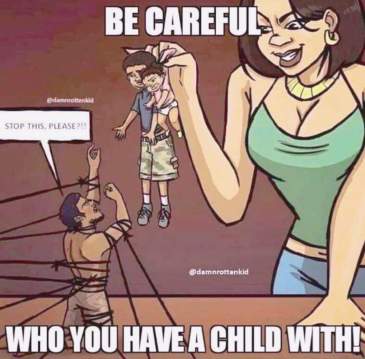 The child, who is INNOCENT, in all this is watching what you do. They see how you treat their father, how you talk about him when he’s not there, they hear your conversations with your friends… like, you’re not hiding anything.

I’m saying all this to say… GROW UP! Whatever happened to cause the relationship between you and him to end, it happened, so move on to someone else and stop using these innocent children as pawns in your sick games.

The reality is when they grow up and they start acting just like you and you have matured and stopped acting that way, you’re going to have to WATCH your children act like you once did. Do you think they are going to hear you out just b/c you’ve changed?

Nah. It doesn’t work that way.

So, how about you wise up now and start being an example to the children you have and show them how to be kind and cordial. Show them how to maintain a friendship or work as a team even tho you’re not together.

The bottom line is they are watching you and they will mimic what they see. Now, will you change your behavior or will you continue to show them that the behavior that you exhibit is normal, fair, and right?

The ball’s in your court. Make the right choice, for the babies. They deserve a fighting chance to make it in this world. It all starts with you… their parents. ❤

I am a writer, blogger, and a creative. I am multi-talented. I am awesome! 💖 I write b/c I am better with written words than spoken words. Get into it. #DopenessActivated